Why? Because oxygen is pretty important for sustaining life.  Oh, and also because I got a new medical device: in-home oxygen.  I have an oxygen concentrator, which is cool because then I don’t have to have oxygen delivered or go anywhere to pick it up.  For those unfamiliar (which included me a few weeks ago) a concentrator is a cool machine that you just plug in and it takes the air around it and magically turns it into oxygen.

The machine also has another piece that gets hooked onto the top and it is used to fill up my portable oxygen tanks.  It’s a pretty cool setup really.  They also gave me like 50 feet of hose so the machine can be stationary in the hallway and reach to my bedroom or the living room.  I’m not sure why the tubing is so long.  Do many people on oxygen square dance frequently or something?  Maybe I should start square dancing.  Well, minus the standing up part.

You know what else oxygen does? Apparently, the Northern Lights are caused by oxygen atoms.  So that’s crazy and incredible and beautiful and something I don’t understand at all.  If I hadn’t seen them myself one time, I would be sticking to the story that everyone who has seen them also happens to do drugs.

If you’ve ever been on an airplane and also stayed conscious at the same time, that was due to pressurization of the cabin and oxygen.  If you wondered how oxygen got into the cabin and cycled out my dad could explain it to you.  He explained the process to me.  I will paraphrase it for you:

Guess what else? Even though fish breathe underwater, they still breathe oxygen.  Their gills extract the oxygen from the water.

There is only one part of the body that has no blood supply and takes oxygen directly from the air: the cornea.

I hope you enjoyed learning a few interesting facts about oxygen with me on this Friday night!

Oh, and also the tubing matches the new flavor of Gatorade.  So, everything is coming together in my life really, if you think about it. 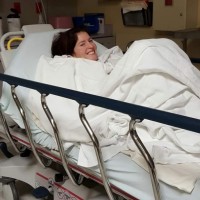